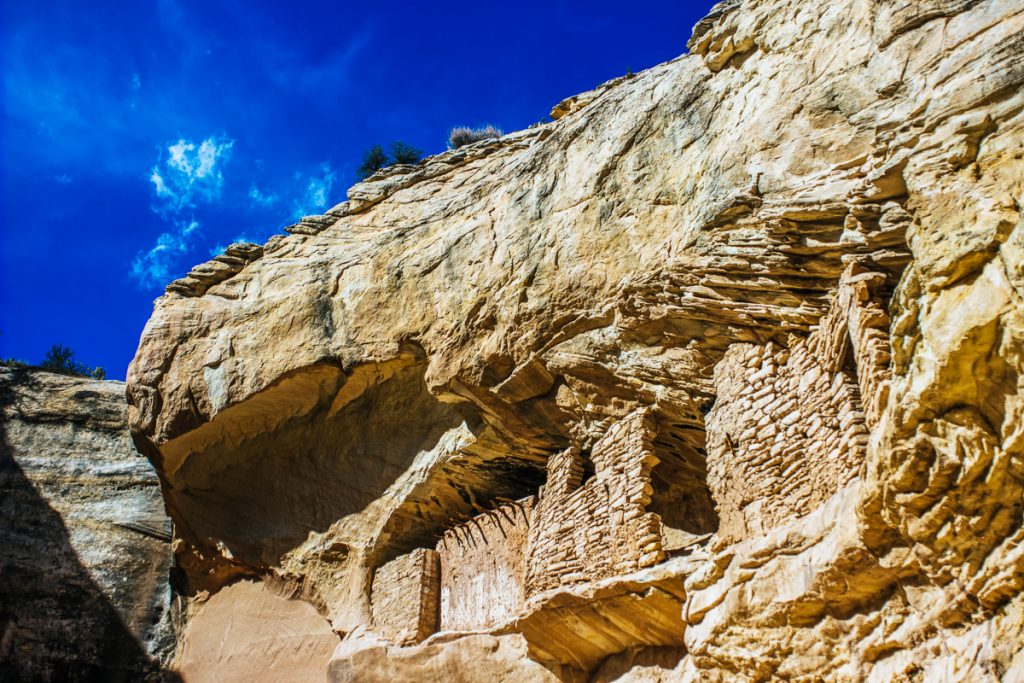 By Teri Orr, Originally published in the Park Record

There was an extra space on a fabulous trip put together by the long established talented folks of Canyonlands Field Institute and I was offered the spot. As a gift. For three days and nights, basecamp was the Recapture Lodge in Bluff with meals and guides and sunshine and red rocks. I did hesitate but … we would be outdoors — they were all about the protocols for COVID and the lodge gave me a solo room that they aired out for two full days between guests — for the sake of the guests of course — but as much for the safety of the lodge staff who clean there. I said yes.

The first night had all of us driving from all our various points — Colorado, Utah and even Berkeley, California. We had dinner outdoors, camp style, and a little program by our guides. And then they sent off us with the reminder of an expected meet-up the next morning at 7 a.m.

We stood in the middle of the middle of nowhere, and from there you could see Monument Valley, Navajo Mountain, and even Shiprock.

When I wandered back toward my room across the dirt field above the San Juan River, Mars had shown up all red and ready to show off in front of the Milky Way and a galaxy of stars in this protected dark sky. It was so very clear and not fully cold yet. I kept my head cocked backwards. My naked eyes with limited celestial knowledge knew enough to be in awe. I eventually, reluctantly went to my room.

Morning was crisp and cold but bright. After a cowboy outdoor breakfast we drove onto permitted BLM sites where we learned about terra firma and the people who walked there before us. The Sleeping Ute — the name of a natural long low mountain feature in the Four Corners area, was easy to spot. We stood in the middle of the middle of nowhere, and from there you could see Monument Valley, Navajo Mountain, and even Shiprock. There were 360 degrees of clear air and the hundreds of miles of just red rocky nature was dizzying. So were the pottery shards and pieces of tools left behind by ancient cultures. One of the guests picked up a piece of pottery and turned it around in his hand and then discarded it in another spot. I spoke without a filter and with the voice in my head of a Navajo medicine woman who once said to me — “don’t disorient that which comes from the land or you may find yourself disoriented.” The guest looked at me and the guide nodded.

Sena, who invited me, has spent all her life living and loving in Moab. Her family had explored this region for decades. We saw all the juniper berries in full and a raven that wanted our attention — or at least our snacks. “I think I want to come back as a raven,” Sena said. I said I saw her more as an eagle. “Oh no,” she said, “eagles have so much responsibility. Raven are the tricksters, they have all the fun.”

There were 360 degrees of clear air and the hundreds of miles of just red rocky nature was dizzying.

Sena now manages a horse ranch with her kind husband, John. It is on land forever preserved on the Colorado River — about 20 miles outside of Moab. She manages wranglers and guests and during COVID her business — that at first froze — has exploded. She spends days and nights showing folks the world over the beauty of the rocks and river. On this trip someone else was in charge of the adventure.

The next two days included a Hopi guide who took us up washes where water once ran and now are rutted and filled with endless soft red dust. We would drive for over an hour and cover maybe 6 miles. Lyle was from Third Mesa of the Hopi Reservation and his girlfriend from Second Mesa. He talked to us about his ancestors and the ruins. We saw ancient dwellings and rock art. He connected the spiritual piece of the Hopi sites to the powerful Chaco Canyon in New Mexico. We felt the mystery and magic of those beliefs.

When I left on the third day to head up to Boulder, Utah, Sena urged me to try a different route and drive to Lake Powell and take the ferry from Halls Crossing to Bullfrog. Her father had been the director of transportation for the state of Utah for years (in addition to being the publisher of the Moab Times Independent newspaper — where Ed Abbey once wrote letters to the editor when he was a park ranger at Arches). So I took that different drive and was so grateful — even though the road was paved — I didn’t see three cars in a hour. I did stay alert because the land was open range and cattle wandered the road freely. The short ride on the ferry was comforting — a gentle rocking in the primitive prehistoric, time-forgotten area made me curious about who might have once lived there under that Rainbow Bridge.

What the trip to those Canyonlands gave to me was the thing I didn’t know I desperately needed. It renewed my sense of wonder. And that has been in short supply most all of my 2020 Sundays in the Park…

Teri Orr is a former editor of The Park Record. She is the founder of the Park City Institute, which provides programming for the George S. and Dolores Doré Eccles Center for the Performing Arts.