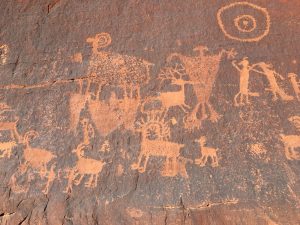 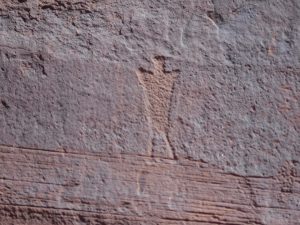 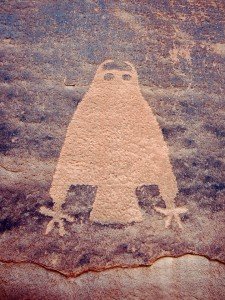 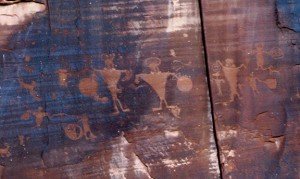 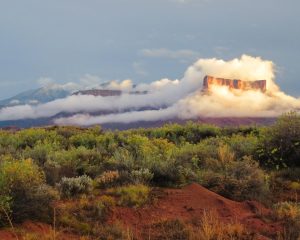 This new seminar is designed in collaboration with guest scholar Dr. Steve Simms. After serving as faculty for CFI’s Eastern Bookcliffs Archaeology for several years, Steve proposed this longer exploratory trip that will focus on “the northern periphery” of the Puebloan world – beginning with the Archaic Barrier Canyon culture and moving into Fremont and Ancestral Puebloan interactions in the region.

Explore archaeology with the experts

This adventure is perfect for desert dwellers and high-country newbies alike! Our experts provide context, connections, and anthropological research throughout various site visits. We will take day trips to see rock art and evidence of prehistoric occupation spanning thousands of years. We’ll also explore sites in the Canyon Rims and the Indian Creek unit of Bears Ears National Monument.

An all inclusive learning adventure

You are here to experience rich southwestern culture! Come ready to immerse yourself within the breathtaking scenery, and let us worry about the details. Your CFI guides are responsible for cooking hearty meals throughout the trip, driving the rugged roads to our hidden trailheads, and providing any necessary first aid and safety gear. Bring your adventurous spirit and be ready to explore at your own pace!

This is how we rate the challenges you might face on a CFI trip.

CFI's Essential Eligibility Criteria outlines specific challenges that you may face on CFI trips. Please consult the EEC for information on responsibilities of participants.
Notes:

See other trips in these categories: Adult Adventure Seminars

Please note: All participants on our adult seminars and on our private trips are required to be fully vaccinated.

The story I hope to tell is one of real lives of real people, not just a sequence of what tribe and “culture” lived where. It is also about change over the life history of individuals, not a static, unchanging traditional past. The beliefs of people about ethnicity and symbolism arose from those interactions,  not the maintenance of strict boundaries. There are valuable messages for our own times."

Dr. Steven R. Simms is Professor Emeritus of Anthropology at Utah State University, Logan, Utah where he taught starting in 1988. He has done archaeological fieldwork across the United States and in the Middle East for 45 years. His areas of specialty are the prehistory of the Great Basin and Colorado Plateau, human behavioral ecology, and archaeological method and theory. Simms has authored over 100 scientific publications, technical reports, and monographs. His books include Ancient Peoples of the Great Basin and Colorado Plateau (2008), and Traces of Fremont: Society and Rock Art in Ancient Utah (2010), and currently in preparation, Looking for Houses: Making Whole the Lithic Scatter of the American Desert West.

From Dr. Simms about the trip curriculum:

The deep past was not a sequential history of bounded “peoples” but rather was an inexorable interaction of peoples over generations. Immigration was not an event, a one-shot deal. Rather, residential cycling was the persistent pattern. The La Sal area saw interaction with larger populations of Fremont farmers to the north (Book Cliffs, Range Creek) as well as Puebloan farmers to the south (Great Sage Plan, Mesa Verde.) Hybridization is not quite accurate, but a Frontier where people of different heritages are thrown together and end up learning each other’s lifeways, languages, beliefs…where children learn to make a basket from a mother of one heritage and an aunt from another heritage, and then the basket has attributes of multiple traditions. This is a place where farming can fail, especially in some decades and some people might leave while others shift to a foraging lifestyle.

For the first portion of the trip, we will camp at the home of CFI’s rustic Field Camp, 40 minutes up the Colorado River from Moab. During the day, we will take excursions westward out towards Canyonlands to see rock art and evidence of prehistoric occupation spanning thousands of years. Then we will base the remaining nights south of the mountains to explore sites in the Canyon Rims area and (pending approval by the Bureau of Land Management) in the Indian Creek unit of Bears Ears National Monument.

Our experts provide context, connections and pertinent anthropological research. Most hiking will be short trips from vehicles with one or two longer hikes stretching 2-4 miles total. Walking routes will include uneven ground, short steep hills, across slickrock, and hops across shallow creeks. Throughout the trip, we will camp in Tipis on cots, in campgrounds, and end with B&B cabin lodging with showers available. All the overnight locations can accommodate an RV with no hookups available. Please inquire about that option.

Some people say food is the most important part of the adventure. On all our overnight trips, CFI will provide breakfast, lunch, and dinner, a morning and afternoon snack, and an appetizer before dinner. If you have a dietary restriction or food allergy, note it on your medical form so we can best prepare.

What gear is provided?

Depends on the trip. As a general rule, CFI provides all group gear related to fully outfitting your trip. Specialized gear like PFDs, wetsuits, dry bags, educational materials are all provided by CFI. Additionally, we take care of all kitchen and dishware needs.

What do I need to bring?

Most importantly, a willingness to slow down, connect to your surroundings, and experience the moment. Additionally, participants are required to bring a tent, sleeping bag, sleeping pad, personal clothing, medication, and other essential personal items. Many gear items are available for rent. Reach out to us if you are interested in seeing a trip specific packing list, or learn more about trip specific packing here.

What about gear rentals?

For any CFI summer camp, gear rentals are free!

What kind of training do your guides and educators have?

Every CFI guide has either a Wilderness First Aid or Wilderness First Responder certification. Your trip leader will have a Wilderness First Responder certification. Anyone working with youth has passed a background check, and shuttle drivers are insured with clean driving records. Backcountry trips carry In-Reach satellite communication devices for emergencies. All guides have been evaluated by Canyonlands Field Institute as possessing the judgement, skills, and disposition required for mitigating risk in the field.

What does it mean that CFI trips are "unplugged"?

As technology grows more and more invasive by the day, CFI promotes connection to what matters. To achieve this, all school and youth programs are unplugged and students are not permitted to bring electronic devices. Not only is there rarely cell service, devices are a distraction to our ability to connect to the present moment. On Private Group Trips or Adult Seminars, the use of devices is permitted but discouraged.

What are your policies for cancellations, deposits or participant responsibilities?

CFI works hard to ensure a positive experience for all guides and participants. Because of the unpredictable nature of outfitting, we have created a series of policies so maintain our ability to manage risk in the outdoors.

For critical information regarding cancellations, deposits, and other participant responsibilities, please view our trip policies page or contact us with any questions.

Explore all Trips and Programs

CFI is a non-profit organization and fees are not taxed. By choosing CFI, you are supporting our efforts to provide lifechanging outdoor experiences for hundreds of children per year.  Scholarships are available on an as needed basis.